DynCorp International
Inc. said it has terminated one of its top lawyers, a move that comes
on the heels of the government contractor's disclosure that some of its
subcontractors may have broken U.S. law in trying to speed up getting
licenses and visas overseas.

The lawyer, Curtis Schehr, was a senior vice president, executive
counsel and the firm's chief compliance officer, a position created
earlier this year. He joined DynCorp in 2006 as general counsel. 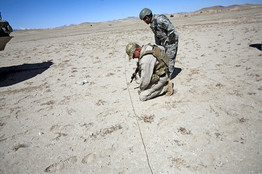 A DynCorp trainer inspected a detonating wire in Afghanistan in March.

The
company disclosed the "termination without cause" in a filing Wednesday
with the Securities and Exchange Commission. The move was effective
Monday, according to the filing.

It couldn't be determined whether Mr. Schehr's departure is
connected with the licensing and visas matter. A DynCorp spokesman
declined to comment, saying it was a personnel matter.

Yet the company has grappled with a series of setbacks that have put
it on the defensive over its oversight and management of government
contracts.

The most recent issue was revealed in a Nov. 9 filing with the SEC.
DynCorp said subcontractors may have spent as much as $300,000 to
"expedite the issuance of a limited number of visas and licenses from
foreign government agencies," which may have violated the Foreign
Corrupt Practices Act.

DynCorp hasn't said which U.S. government contract was involved. The
company said it notified the SEC and the Justice Department after
discovering the problem.

There have been other issues at DynCorp recently. Following Iraq's
decision to oust Blackwater Worldwide from Iraq, DynCorp was supposed
to move quickly provide helicopters for U.S. diplomats in Baghdad. But
that has been delayed well into next year as DynCorp's aircraft weren't
suited to the job.

In March, a DynCorp contractor in Afghanistan was found dead after
an apparent drug overdose. In a statement for a September hearing of
the Commission on Wartime Contracting, DynCorp's chief executive
acknowledged the incident and said the company had "reinforced" its
standards and implemented new training.

In May, the company named Mr. Schehr to the chief compliance officer
position, which had "management oversight for the company's ethics and
business conduct program, related internal investigations, internal
audit, and trade compliance, which includes all export and import
activities."