CANADA/CHINA: Canada looks to China to exploit oil sands rejected by US 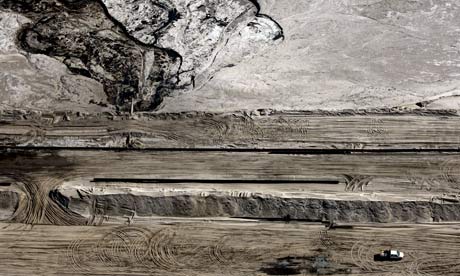 Canada, faced with growing political
pressure over the extraction of oil from its highly polluting tar sands, has
begun courting China and other Asian
countries to exploit the resource.

The move comes as American
firms are turning away from tar sands because of its heavy carbon footprint and damage to the landscape.

Whole
Foods, the high-end organic grocery chain, and retailer Bed Bath &
Beyond last week both signed up to a campaign by ForestEthics
to stop US firms using oil from Canadian tar sands. The Pentagon is also
scaling down its use of tar sands oil to meet a 2007 law requiring the
US government to source fuels with lower greenhouse gas emissions.

Major
oil companies such as Shell are also coming under shareholder pressure
to pull out of the Canadian projects. Earlier this year, Shell announced
it was scaling back its expansion plans for the tar sands after a revolt by shareholders. Producing oil from the Alberta tar sands causes up to five times more greenhouse gas
emissions than conventional crude oil, according to the campaign
group Greenpeace.

In the most significant deal to date, the
Canadian government recently approved a C$1.9bn (Â£1.5bn) investment
giving the Chinese state-owned oil company PetroÂ­China a majority share
in two projects. Prime minister Stephen Harper said: "Expect more
Chinese investment in the resource and energy sectors ... there will definitely be
more." China's growing investment in the tar sands is seen in Canada as a
useful counter to waning demand for tar sands oil from the US, its
biggest customer. The moves, which have largely gone unnoticed outside
north America, could add further tension to efforts to try to reach a
global action plan on climate change.

The state department envoy,
Todd Stern, on Tuesday accused China of being "a bit ambiguous" in its
commitments to reducing greenhouse gas emissions. Efforts to impose
national carbon limits in the US have stalled in Congress, but a number
of leading US firms are moving to reduce their carbon footprint by
moving away from abandoning tar sands oil.

Canada is the biggest
source of US oil imports, with 65% of tar sands production going to
refineries in the midwest. "Companies have been hitting the pause button
on projects," said Simon Dyer, of the Pembina Institute oil
sands watch project.

But not China. PetroChina has taken a 60%
stake in two new tar sands projects due to get under way in the MacKay
River and Dover areas next year, with plans to produce up to 35,000
barrels a day by 2014, and eventually up to 500,000 a day.

China
made its first investment in the tar sands in 2005, with state-owned
China National Offshore Oil Corporation spending C$150m for a 17% stake
in a startup MEG Energy Corp. Another Chinese state-owned firm, Sinopec,
last year increased its interest in the Northern Lights oil project to
50%. China's National Petroleum Corp has also bought oil sands leases
that it has not yet developed.

The projects, which will begin
coming on line over the next decade, are seen as crucial to a long term
strategy of finding new sources of energy as China's economy continues
to expand. "Right now I would characterise it as a token toehold," said
Peter Tertzakian, chief energy economist at ARC Financial Corporation,
an energy-focused private equity firm in Calgary, Alberta.

But he
said the move by China could also represent the beginnings of a major
shift in control of the tar sands. "Hitherto we were very accustomed to
have western countries coming here, particularly American companies or
companies from the UK, taking an interest in oil and gas companies
and we were OK with that," he said. "From a continental energy security
perspective of course, there is a little more hesitation when emerging
powers come here, but the Canadian government has over the last year
indicated more willingness to do business with China."

Japanese
and South Korean companies have also begun moving in, opening up
potential new markets for Canada at a time when forecasts show a fall in
global demand for oil. India's Reliance Industries is also reportedly
bidding on a project. The move by China has also crystalised increased
concerns among conservationists and First Nation groups about a proposed
1,200 kilometre pipeline that would carry tar sands oil from northern
Alberta, across British Columbia to oil tankers off the Pacific coast.