ECUADOR: In Ecuador, Resentment of an Oil Company Oozes

Published by
New York Times
| By
SIMON ROMERO and CLIFFORD KRAUSS
|
Thursday, May 14, 2009 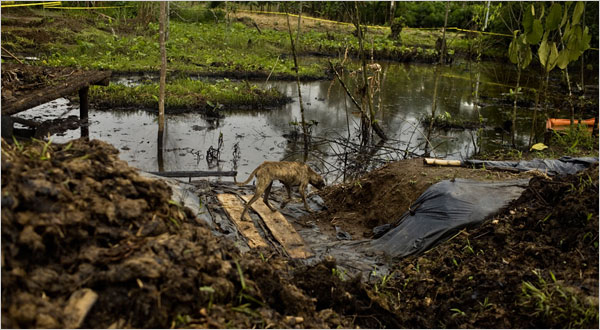 Mention to Anita RuÃ­z the name of the giant oil company Chevron,
and she trembles with rage. At her wooden hut here in the Amazon
forest, where oil-project flares illuminate the night sky, she points
to a portrait of her youngest son, who died seven years ago of leukemia
at age 16.

Residents of Shushufindi, Ecuador, wash in the water of the Santa Fe
River. The residents say toxic chemicals have leached into the soil,
groundwater and streams.

"We believe the American
oilmen created the pollution that killed my son," said Ms. RuÃ­z, 58,
who lives in a clearing where Texaco, the American oil company that
Chevron acquired in 2001, once poured oil waste into pits used decades
ago for drilling wells.

Texaco's roughnecks are long gone, but
black gunk from the pits seeps to the topsoil here and in dozens of
other spots in Ecuador's northeastern jungle. These days the only
Chevron employees who visit the former oil fields, in a region where
resentment against the company runs high, do so escorted by bodyguards
toting guns.

They represent one side in a bitter fight that is
developing into the world's largest environmental lawsuit, with $27
billion in potential damages.

Chevron is preparing for a ruling
by a lone judge in a tiny courtroom on the top floor of a shopping
center in Lago Agrio, a town rife with slums that Texaco founded in the
1960s as its base camp in the Amazon.

Chevron faces claims for an
era when oil companies were less purposeful about protecting the
environment than they are today. It also faces potentially huge damages
in a country where American corporations once wielded strong influence
but are now treated with discourtesy, if not contempt.

The
sympathies of the judge, a former military officer named Juan NuÃ±ez,
are not hard to discern, and he appears likely to rule against Chevron
this year. "This is a fight between a Goliath and people who cannot
even pay their bills," Mr. NuÃ±ez, 57, said in an interview in his
office, where more than 100,000 pages of evidence were stacked to the
ceiling.

But his ruling is not likely to end the case. Already,
the dispute is the subject of intense lobbying in Washington, which
could apply pressure to Ecuador on Chevron's behalf. If the company
loses, it is ready to pursue appeals in Ecuador and, if necessary, to
seek international arbitration.

Texaco laid down stakes here in
the 1960s, and began producing oil in the early 1970s when Ecuador was
still under military rule. Before the oil began to flow, the region was
inhabited by forest tribes, including the CofÃ¡n and the Siona-Secoya.

Political tension permeated Texaco's presence in Ecuador much of the
time it operated here in a partnership with the government, and by the
time it was prepared to leave, in the early 1990s, a cleanup of its
operations was needed.

So Texaco reached a $40 million
agreement with Ecuador to clean a portion of the well sites and waste
pits in its concession area, absolving it of future liability. But that
cleanup, carried out in the 1990s, was far from the bookend Texaco
hoped to achieve.

Instead, villagers in Ecuador became
convinced they were getting sick from the pollution left behind. They
filed suit in 1993 in the United States, and later claimed that their
grievances were not covered by Texaco's settlement agreement.

As
the case snaked its way through American courts, Ecuador seemed to fall
to pieces, going through 10 presidents in a decade by 2006. The
American lawsuit was eventually thrown out, on grounds the case should
not be tried in the United States, and the plaintiffs reformulated it
and filed it here.

Today, Chevron has absorbed Texaco, and Ecuador has gone through a metamorphosis under the leftist President Rafael Correa. He has repeatedly sided with the plaintiffs, calling Chevron's Ecuadorean past "a crime against humanity."

Such
sentiment holds strong appeal to those who claim that people here, like
Ms. RuÃ­z's 16-year-old son, are dying from the pollution that Texaco
spawned. Citing scientific studies, the plaintiffs claim that toxic
chemicals from Texaco's waste pits, including benzene, which is known
to induce leukemia, have leached for decades into soil, groundwater and
streams. A report last year by Richard Cabrera, a geologist and
court-appointed expert, estimated that 1,400 people in this jungle
region - perhaps more - had died of cancer because of oil contamination.

Chevron
rejected the claims, contending that Mr. Cabrera had no medical
evidence to back up his conclusion that the company should pay $2.9
billion just to compensate for excess cancer deaths.

The lawsuit here focuses more on environmental cleanup than cancer
deaths, but the issue remains hotly disputed, particularly after a
judge in California dismissed a separate claim against Chevron for
cancer deaths in 2007, finding that false claims had been put forth by
the plaintiffs' lawyer, Cristobal Bonifaz, who was instrumental in
starting the fight against Texaco in the 1990s but is no longer
involved in the suit.

Fishermen near the town of Lago Agrio.

Mercedes Jimenez lives next to an oil well and complains of headaches.

Nearly every other detail in
the case is disputed as well, save one: Chevron and the plaintiffs
agree that the expansion of oil exploration in northeastern Ecuador
spoiled what had once been a pristine jungle.

More than four
decades later, evidence of the contamination is unavoidable at well
sites near Lago Agrio and other towns in the region.

Some pools
of waste dug by Texaco combining noxious drilling mud and crude oil
still lie exposed under the sun, seeping into nearby water systems.

Other
pits, ostensibly cleaned up by Texaco after the company handed over
operations to the national oil company, Petroecuador, have varying
amounts of pollutants near the surface, leading to clashes among
scientists for the two sides about the exact levels and their health
implications. Petroecuador has a poor environmental record of its own
and faces criticism for at least 800 oil spills since 1990.

In
what may be the most contentious part of the legal battle, Chevron
argues that it cannot be held responsible for damage done by
Petroecuador after it took over the site, or by the Ecuadorean
government's broader project to colonize its jungle frontier, which
brought more than 40,000 settlers to the region by the 1970s using
roads that Texaco built.

The plaintiffs claim Chevron must be
held responsible for the damage where Texaco once operated, up to the
present, claiming the systems put in place by Texaco allowed
Petroecuador to go on polluting. If Chevron has a problem with that,
said Steven Donziger, a lawyer for the plaintiffs, then it should sue
Petroecuador.

"The damage caused by Texaco is still causing harm
more than 18 years after Texaco ceased operating, and will continue to
do so for centuries until it is cleaned up," Mr. Donziger said.

Despite
the potential size of the damages, Chevron insists its solvency is not
at stake. But the legal battle is denting the company's environmental
image. Ecuador's attorney general last year indicted two of Chevron's
lawyers, accusing them of fraudulently conspiring to prove that Texaco
had cleaned up waste pits.

That maneuver infuriated Chevron. "In
politicizing and corrupting the case as much as they have done, they
are signing on to 10 or 20 years more of litigation," said Silvia
Garrigo, a lawyer who is Chevron's manager of global issues and policy.
"Any enforcement action is going to be met with a challenge by us."

Chevron
has fought back with trade lawyers and lobbyists, using highly paid
talent like the former United States trade representative Mickey Kantor,
and the former Clinton White House chief of staff Mack McLarty to push
the Obama administration to strip Ecuador of trade preferences, on the
grounds that it broke its agreement to absolve the oil company of
liability.

"I can't warrant what Texaco did 42 years ago or 40
years ago or 35 years ago," Mr. Kantor said. "All I know is they spent
$40 million to clean it up. They were given a release signed by the
government of Ecuador and Petroecuador."

The lobbying effort in
Washington appears to be an effort to pressure Ecuador to come to the
table and work out a deal. "We want to resolve this in a reasonable
fashion," Mr. Kantor said.

Texaco may be gone, but the destiny of
people near Lago Agrio is still intertwined with that of the United
States, and anger simmers here. Those who claim to have suffered the
greatest harm face years of delay, at best, before any payout. Some may
not live to see the case resolved.

JosÃ© GuamÃ¡n, 62, acknowledges
that possibility. He lives near a well once operated by Texaco. Guiding
a visitor around his property, he pointed to a covered waste pit where
his late wife, MarÃ­a, once fell and emerged covered in black ooze. She
died at 45, leaving behind their two children. Mr. GuamÃ¡n said he did
not know what had caused her death.

"But if I know one thing, it
is that petroleum curses anyone who touches it," Mr. GuamÃ¡n said. "If
that applies to us, then it should apply to the Americans as well."