How much money did Charles G.
Taylor, the deposed president of Liberia, siphon out of his
destitute, war-shattered country, and where is it? 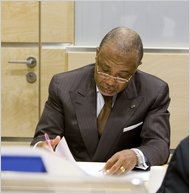 Charles Taylor at the Special Court for Sierra Leone
in The Hague in 2009.

For almost seven years, since an international warrant was issued for
his arrest, the search has stretched from the mangrove swamps and
diamond fields of West Africa to Swiss banks and shell corporations - a
state-of-the-art version of the sweeping asset hunts that have
accompanied the fall of autocrats since the shah of Iran's demise in the
1970s.

Investigators have crawled in the dirt under porches and buildings in
this impoverished capital to seek out financial records. They have
confronted bankers and government officials on four continents. They
have cross-referenced mazes of documents charting the transfer of
millions of dollars into and out of dozens of accounts.

But they have come up dry for any money in Mr. Taylor's name. In fact,
four years ago, Mr. Taylor was classified as "partially indigent" by the
Special Court for Sierra Leone at The Hague, where he is charged with
instigating murder, mutilation, rape and sexual slavery during
intertwined wars in Liberia and Sierra Leone that claimed more than
250,000 victims from 1989 to 2003.

That has left donor nations - the United States being the largest - to
cover his monthly $100,000 legal bill and the broader costs of his $20
million trial.

But the investigators push on, and a review by the International Herald
Tribune of court transcripts, bank records, and newly available
government receipts and confidential prosecution memos indicates why
they are reluctant to give up the hunt.

Some of the records show how the country's largest timber company sent
tax payments to Mr. Taylor's private account rather than the national
treasury. Others trace huge payments made by the dominant cellphone
company to people suspected of being Taylor cronies. Others depict a web
of front companies and banks from Hong Kong to New York involved in the
movement of millions of dollars into Mr. Taylor's accounts in Liberia.

"Money would go to an arms dealer or an ally and from there to a money
management firm and then back to Liberia, then cashed out and moved to
another bank account," said Thomas R. Creal, an accountant from Chicago
who for five years has led the search for the United Nations.

Retained by Liberia, he and three law firms are developing a new
strategy involving filing civil damage claims against companies,
governments and international banks that they contend aided Mr. Taylor
in illegal transactions. The goal, after investigators have succeeded in
freezing only about $8 million held by Taylor relatives and associates,
is to win judgments for Liberia even if Taylor accounts cannot be
found.

The estimates of hidden wealth - believed to have been extracted from
Liberia's timber and diamond trades, its international merchant shipping
registry, tax coffers and the government of Taiwan - run from as high
as $3 billion to a middling range of $280 million. Mr. Taylor's own
estimate is zero.

Last year, the flamboyant former warlord taunted prosecutors in court,
dismissing the financial investigations as efforts to demonize him. "I
challenge any human being or organization in this world - I mean this
planet - to bring one bank account that Charles Taylor has money in," he
said. "I have heard the prosecutor blatantly lie, saying, 'We found
millions.' Bring the millions here."

Stephen Rapp, the U.S. ambassador at large for war crimes issues and a
former chief prosecutor on the case, said the hunt could continue for
years. "You will never find an account listed under Charles Taylor," he
said. "In all of these asset recovery cases of former leaders who have
been accused of corruption or worse, it has taken a long time to achieve
recovery. So this is not going to end."

In the banking world, investigators call high-profile targets, like
deposed heads of state or military officials, P.E.P.'s - "politically
exposed persons." Financially speaking, Mr. Taylor is one of the most
elusive.

The list has included Slobodan
Milosevic of Yugoslavia, Ferdinand Marcos of the Philippines and Sani Abacha,
the Nigerian military dictator who pocketed as much as $5 billion
through front companies and Swiss bank accounts, Swiss investigators
say.

Since 1999, the Nigerian government has recovered more than $700 million
with Switzerland's assistance.

The Taylor hunt has gone on as he has been imprisoned for four years in a
Dutch detention center - a long way down from when he ruled with a
showman's flair, dressing in traditional African robes, cream safari
suits or white vestments at a mass "Liberia for Jesus" prayer rally in
2002.

Mr. Taylor, who favors pinstripe suits in court and is a recent convert
to Judaism, vehemently dismisses the criminal charges as based on
"lies." The grisliest accusations came from an admitted former death
squad commander, Joseph Marzah, known as Zigzag, who described orders
from Mr. Taylor to engage in cannibalism and ritualistic eating of
enemies. U.N. peacekeepers
in Sierra Leone were also targets, he testified, saying Mr. Taylor
urged his fighters to eat "them as pork."

Financial suspicions about him go back to 1983, when he was fired for
embezzling nearly a million dollars while a government administrator. As
a renegade warlord in the '90s, he controlled diamond-rich regions,
timber concessions, rubber plantations and iron ore deposits. As
president, he directed large timber companies to wire as much as $2
million of their taxes to a personal account with the Liberian Bank for
Development and Investment, according to Liberian bank records.

His defense is that the money did not go to him personally but to buying
black-market weapons to thwart a U.N. weapons embargo aimed at quelling
his brutal wars with insurgent warlords and, through other warlords,
Sierra Leone.

In court testimony, Mr. Taylor said bluntly, "The country is at war.
This is our remedy."

Mr. Taylor holds an asset any P.E.P. would envy.

"He has a very common name," said Daniel Thelesklaf, director of the
International Center for Asset Recovery in Switzerland. "One English
bank made a search of his name and found about 16,000 hits. It's really
like finding the needle in the haystack."

One place Mr. Taylor used his name was at the Liberian Bank for
Development and Investment in Monrovia. From 2000 to 2003, when his
presidential salary was $24,000, records obtained by Mr. Creal show more
than $24 million moving into and out of the account, passed from
foreign banks, with Citibank in New York acting as the clearinghouse and
processing the transfers.

Most of the money came from the government of Taiwan - more than $20
million in eight payments made while it was jockeying to maintain
Liberia's diplomatic recognition against fierce competition from China.

In a statement, the Taiwan Foreign Ministry said that the money was
earmarked for AIDS medicine, a children's center, vocational training
and charity contributions. In court, though, Mr. Taylor said the funds
covered military salaries, Balkan arms deals and the airlift of wounded
bombing victims.

Michel Lu, a Taiwan diplomat, said in an interview that his government
offered "deep regret" for a "humiliating" turn of events. He said that,
internationally isolated, it was under tremendous pressure from Mr.
Taylor, who "threatened to cut off relations," and that it had since
discarded checkbook-style diplomacy.

Citibank, which has been criticized for its role in the clearinghouse
transactions involving Liberia, has defended its activities. The bank
"fully complied with all applicable laws and U.S. and international best
practices in place at the time," said a bank spokesman, Adam
Castellani. He said the bank, which processes thousands of transfers
daily, "works continually to strengthen its own correspondent banking
due diligence processes."

What happened to the money is not clear. By the time of Mr. Taylor's
indictment in 2003, his Liberian bank accounts were largely drained,
sometimes with groups of men taking out as much as $1.3 million in cash
in a single withdrawal, Mr. Creal said.

"Frankly speaking," said Mr. Lu of Taiwan, "nobody can tell you where it
went."

The price of monopoly

U.N. investigators said they believed that Mr. Taylor also extracted
money from companies that operated in Liberia and needed his good will.

They have pressed in Liberian courts for information about the entwined
companies PLC Investments and Lonestar Communications, suspecting they
could be a continuing source of income for Mr. Taylor. Lonestar, the
nation's leading cellphone company, was essentially a monopoly for four
years, controlled by two Taylor financial advisers through PLC, a
holding company, a U.N. report says. They sold 60 percent of Lonestar to
a Lebanese group, Investcom, which in turn was acquired by a South
African cellphone company, MTN Group, in 2006.

Mr. Taylor's former vice president, Moses Blah, and other former
ministers testified before the government's Truth and Reconciliation
Commission that Mr. Taylor became a secret part owner in Lonestar and
granted it an exclusive license to run a mobile network, dismissing
officials who urged an open market.

Since then, Mr. Creal has found records of huge Lonestar checks issued
to junior employees whom he suspects were allies of Mr. Taylor.

A search warrant turned up bank statements that showed checks deposited
by the employees in another Liberian bank, Ecobank, and the money being
drawn out immediately in cash.

This year, the impoverished Liberian government retained Mr. Creal and
other legal advisers on a contingency basis to explore civil suits
against more than a score of companies and banks, on the premise that
they were "aiders and abettors" who helped Mr. Taylor move money
illegally or without following banking regulations.

The strategy is, in part, an acknowledgement that they may never find
money attached to Mr. Taylor himself, which many of them believe is
hidden in offshore accounts outside their grasp.

Mr. Taylor's trial, in its second year, is slowly proceeding toward a
verdict. He faces an unspecified sentence in a British prison if
convicted.

Liberia's president, Ellen
Johnson Sirleaf, a Taylor supporter turned harsh critic, said that
recovering money will be hard. "Mr. Taylor ran this country like it was
his personal fiefdom," she said in an interview. "Resources were given
to people in a manner that pleased him, and there were no systems or
institutions."

Regardless of the outcome, the money hunt will continue. "There were
guns, diamonds, cash, timber and gold moving around West Africa for the
individual personal gain of heads of state, boy generals, international
terrorists, diamond dealers and gunrunners," said David M. Crane, a
former prosecutor on Mr. Taylor's case and a professor at Syracuse
University College of Law in New York.