AG, the Swiss bank battered by massive write-downs and its role in a
U.S. tax-evasion scheme, announced the latest shake-up in its top
executive ranks with the surprise departure of chief executive Marcel
Rohner.

Mr. Rohner is being replaced by 65-year-old Oswald GrÃ¼bel, who had been CEO at Swiss rival Credit Suisse Group until he retired in 2007.

In a statement, UBS said Mr. Rohner told UBS's
board in January that he planned to retire as CEO after the conclusion
of the "ongoing investment bank repositioning and wealth management
restructuring phase."

But Mr. Rohner's departure comes just a short time -- less than two
years -- after he was named CEO. In July 2007, Mr. Rohner replaced
Peter Wuffli just as the bank was coming to grips with massive
write-downs tied to bad bets on securities underpinned by subprime
mortgage loans.

At the time of the announcement, UBS said Mr. Rohner "is well
prepared for his new role" and the bank gave no indication that he
would be CEO for a short period of time.

Mr. Rohner was replaced as head of the wealth management by Raoul
Weil. Mr. Weil subsequently was indicted for his alleged role in
helping U.S. clients of UBS evade taxes. A lawyer for Mr. Weil has
denied the charge.

Mr. Rohner's sudden departure comes after UBS agreed earlier this
month to a $780 million settlement with the U.S. Justice Department of
a criminal inquiry into the bank's role in the tax evasion. A civil
inquiry is ongoing and the U.S. Internal Revenue Service has sued UBS
to turn over the identities of 52,000 Americans with Swiss accounts at
UBS. 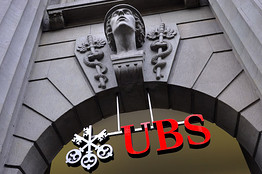 It's
also a surprise that UBS was forced to turn to the ranks of a rival to
fill a top leadership spot. Mr. GrÃ¼bel spent four decades at Credit
Suisse and served as co-CEO and CEO from 2003 until his retirement in
2007. He got his start in banking and securities in the 1960's at Deutsche Bank AG.

Mr.
Rohner along with Chairman Peter Kurer had been the team assigned the
task of trying to stabilize UBS after a series of losses and
embarrassments. Earlier this month, the bank reported a net loss of 8.1
billion Swiss francs ($6.92 billion) adding to a 2008 loss of 19.7
billion francs.

In a statement, Mr. GrÃ¼bel, the new CEO said, "I will do all I can to bring UBS back on a profitable, successful track."

Morale inside the bank has suffered, especially at UBS's investment
bank where cash bonuses have been cut as part of a larger plan to
reduce bonuses from about 10 billion Swiss francs in 2007 to about two
billion francs in 2008.

Those bonuses were cut amid pressure from the Swiss government which
has had to bail out UBS by helping the bank move $60 billion in assets
to a Swiss fund.