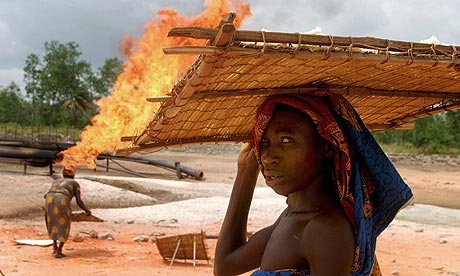 Shell
will come under fire from shareholders and environmentalists on Tuesday
over executive pay, polluting gas flaring and alleged human rights
abuses in Nigeria.

The annual general meeting in London will see
a rebellion from investors angry that the board has used its discretion
to award bonuses despite the company's failure to meet pre-set targets.

The
Association of British Insurers has issued an "amber top" alert to its
members about its concerns while one of the top 10 Shell investors has
already said privately that it would vote against the company's
remuneration report.

The louder noise is likely to come from
outside the annual meeting at London's Barbican Centre where a
coalition of non-governmental organisations (NGOs) under the banner of
ShellGuilty has promised to stage a "noisy and fiery" demonstration.

Pressure
on Shell has increased because the company will stand trial in New York
next week for alleged collusion in human rights abuses dating back to the 1995 hanging of the writer and activist Ken Saro-Wiwa. He had campaigned against Shell's operations in his native Niger Delta region.

Shell
also faces legal action in the Netherlands, the first time the
Anglo-Dutch energy group has had to defend itself in a Dutch court.
Friends of the Earth Netherlands and Nigerian plaintiffs are bringing
an action over repeated oil spills in the Niger Delta.

"Shareholders
need to start worrying more about Shell's impact on the planet than the
impact of the company's pension packages on their pockets," said
Richard Howlett, campaigner at Platform, one of the organisations in
the ShellGuilty campaign.

"Shell are planning to invest $5bn [Â£3.3bn] in tar sands
- the dirtiest means of oil extraction. This money would more than
cover the cost of ending gas flaring in Nigeria. Shell needs to wake up
to its responsibility for environmental devastation," he added.

Anne
van Schaik, of another member of the NGO coalition, Friends of the
Earth Netherlands, said: "We hope the Dutch judge will decide that
Shell HQ is accountable for the company's operations worldwide and that
the company will be forced to clean up the pollution and compensate the victims properly."

Steve Kretzmann, from Oil Change International,
added: "We are glad to see Shell finally being held to account for
their human rights abuses in this month's trial. But for justice to
really be done the illegal gas flaring Ken Saro-Wiwa died fighting
against must end."

Shell declined to comment, saying it would answer any questions at the annual meeting.