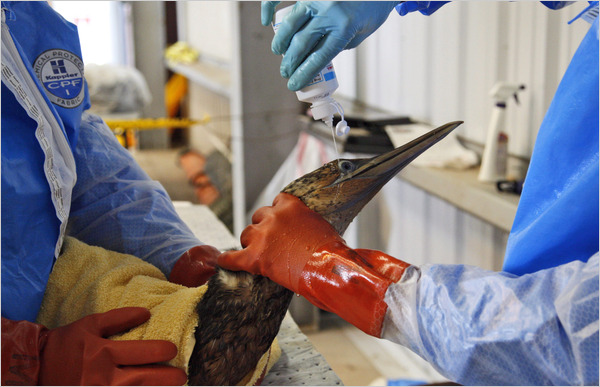 A team from Tri-State Bird Rescue and Research
treated an oil-covered Northern Gannet on Friday in Fort Jackson, La.

Officials in the Obama administration began for the first time Friday
to publicly chastise BP America for its handling of the spreading oil gusher
in the Gulf of Mexico, calling the oil company's current resources
inadequate to stop what is unfolding into an environmental catastrophe.

As oil edged toward the Louisiana coast, fears continued to grow that
the leak from the seabed oil well could spiral out of control. One
official at the National Oceanic and Atmospheric Administration, in a
widely distributed warning on Friday, said the oil flow could grow from
the current estimate of 5,000 barrels a day to "an order of magnitude
higher than that."

The increased level of concern was reflected in the sharp new criticism
by federal officials of BP for not stopping the leak and cleaning up the
spill before it reached land, something the company's officials had
said was possible earlier in the week.

"It is clear that after several unsuccessful attempts to secure the
source of the leak, it is time for BP to supplement their current
mobilization as the slick of oil moves toward shore," Homeland Security
Secretary Janet
Napolitano said pointedly, as the government announced steps to
supplement its response with people and equipment from the Defense
Department.

Geoffrey S. Morrell, deputy assistant secretary of defense, said in a
statement that the government would hold BP accountable for the cost of
the department's deployment, which as of Friday night included the
Louisiana National Guard to help clean up coastal areas once the oil
comes ashore.

BP officials said they did everything possible, and a review of the
response suggests it may be too simplistic to place all the blame on the
oil company. The federal government also had opportunities to move more
quickly, but did not do so while it waited for a resolution to the
spreading spill from BP, which was leasing the drilling rig that
exploded in flames on April 20 and sank two days later. Eleven workers
are missing and presumed dead.

The Department of Homeland Security waited until
Thursday to declare that the incident was "a spill of national
significance," and then set up a second command center in Mobile. The
actions came only after the estimate of the size of the spill was
increased fivefold to 5,000 barrels a day.

The delay meant that the Homeland Security Department waited until late
this week to formally request a more robust response from the Department
of Defense, with Ms. Napolitano acknowledging even as late as Thursday
afternoon that she did not know if the Defense Department even had
equipment that might be helpful.

By Friday afternoon, she said, the Defense Department had agreed to send
two large military transport planes to spray chemicals that can
disperse the oil while it is still in the Gulf.

Officials initially seemed to underestimate the threat of a leak, just
as BP did last year
when it told the government such an event was highly unlikely. Rear
Adm. Mary E. Landry, the chief Coast Guard official in charge of the
response, said on April 22, after the rig sank, that the oil that was on
the surface appeared to be merely residual oil from the fire, though
she said it was unclear what was going on underwater. The day after,
officials said that it appeared the well's blowout preventer had kicked
in and that there did not seem to be any oil leaking from the well,
though they cautioned it was not a guarantee.

BP officials, even after the oil leak was confirmed by using
remote-controlled robots, expressed confidence that the leak was slow
enough, and steps taken out in the Gulf of Mexico aggressive enough,
that the oil would never reach the coast.

(The NOAA document on a potentially far larger leak, first obtained by
The Press-Register in Mobile, Ala., was described by an agency spokesman
as simply a possibility raised by a staff member, not an official
prediction.)

Some oil industry critics questioned whether the federal government is
too reliant on oil companies to manage the response to major spills,
leaving the government unable to evaluate if the response is robust
enough.

"Here you have the company that is responsible for the accident leading
the response to the crisis," said Tyson Slocum, director of Public
Citizen's Energy Program. "There is a problem here, and the
consequence is clear."

But it is still the government, in this case the Coast Guard, that has
the final say. A law passed a year after the 1989 Exxon Valdez disaster makes the owner of a
rig or vessel responsible for cleaning up a spill. But oversight of the
cleanup is designated to the Coast Guard, with advice from other federal
agencies.

Rear Adm. Robert C. North, retired, who was commander of the Coast
Guard's Eighth District from 1994 to 1996, said that decisions in these
situations are made collectively, but that the buck essentially stops
with the federal coordinator - in this case, Admiral Landry. "The
federal on-scene coordinator is kind of the one individual to say, 'I
think we need to do more' or 'That's adequate,' " he said.

If the government determines that the responsible party is not up to the
job, it can federalize the spill, running the cleanup operations
without the private company but billing it for the cost. This is a last
resort, however.

In this case, Admiral North said, the oil companies have more technology
and expertise than the government. "It doesn't appear that federalizing
it would bring in any more resources," he said.

Officials from BP and the federal government have repeatedly said they
had prepared for the worst, even though a plan filed last year with the
government said it was highly unlikely that a spill or leak would ever
result from the Deep Horizon rig.

"There are not much additional available resources in the world to fight
this thing offshore," said Doug Suttles, BP's chief operating officer
for exploration and production, in an interview. "We've basically thrown
everything we have at it."

Mr. Suttles said BP's efforts did not change after it was disclosed
Wednesday night that the leak was estimated at 5,000 barrels a day, five
times larger than initial estimates had suggested. He said BP, which is
spending roughly $6 million a day and will likely spend far more when
oil reaches land, had already been mobilizing for a far larger spill.

However, he did not deny that BP initially thought the slick could be
stopped before it reached the coastline.

"In the early days, the belief was that we probably could have contained
it offshore," Mr. Suttles said. "Unfortunately, since the event began
we haven't had that much good weather." The first weekend after the
sinking of the rig, choppy seas brought the cleanup to a near halt, and
made more complicated tactics like controlled burns impossible.

But even after the weather cleared - and just a few days before
officials began acknowledging the likelihood of landfall - Tony Hayward,
BP's chief executive, expressed confidence the spill could be
contained.

Adm. Thad W. Allen, the commandant of the Coast Guard, said Friday that
he agreed the situation was catastrophic and could continue to unfold
for up to three months, but he said he remained satisfied with his
team's response, saying that even if it had initially known that the
leak was 5,000 barrels a day, the response would have been the same.
"While it may not have been visible to the public, from the very start,
we have been working this very hard," he said.

Within a matter of hours of the report of the explosion, the Coast Guard
had dispatched three cutters, four helicopters and a plane to the
scene, helping to save 90 workers, including three critically injured
ones who were sent by helicopter for emergency care.

"We have never tried so many different methods for a large spill on the
surface as we have during this, and I have been doing oil spill response
for 30 years," Admiral Allen said.

This article has been revised to reflect the
following correction:

An earlier version of this article contained a
picture caption that incorrectly identified the location where booms
were being deployed to battle the oil spill. It is Port Eads, La., not
Port East.