The New York attorney general is talking tough to Chuck.

In an official notice sent to Charles Schwab & Co. Friday,
Attorney General Andrew Cuomo warned that his office plans to sue the
largest online brokerage firm for civil fraud over its marketing and
sales of auction-rate securities to clients. Emails and testimony cited
in the letter show Schwab's brokers had little idea of what they were
selling and later failed to tell clients that the market was collapsing. 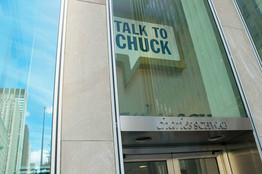 Mr.
Cuomo writes in the letter that his office would be open to a
settlement with Schwab, but it must agree to buy back the securities
from investors still stuck with them.

More than a dozen Wall Street firms and small brokerages agreed to
pay more than $60 billion to buy back the securities from investors
after investigators found they didn't properly inform clients about the
risks, or that the market was crumbling, increasing their losses.
Schwab is among a handful that haven't settled.

"The Attorney General's allegations are without merit," Schwab said
in a statement. "They unfairly lay blame on our company for an illiquid
market and improper behavior by the large Wall Street firms that
created" and then stopped supporting the market.

"Schwab brokers, while trained to levels beyond industry standards,
could not be expected to foresee and disclose market risks that even
regulators and market experts did not foresee," Schwab said.

The attorney general's investigation of Schwab found that brokers
were unaware of and misleading about the risks of the securities --
promoting them to customers as cash-like investments, according to the
letter. It also found that some traders and executives knew the market
was cracking as early as the autumn of 2007 and took steps to protect
the company, but didn't disclose those problems to customers.

At Charles Schwab, which uses the advertising slogan "Talk to
Chuck," brokers admitted their ignorance about the product, according
to Mr. Cuomo's letter.

A broker testified to Mr. Cuomo's investigators: "I don't know what
measuring scale you would want to use to assess my knowledge about
auction-rate securities...but on whatever measuring scale my knowledge
was pretty low," according to the letter.

Charles Schwab executives received daily reports showing in the fall
of 2007 that demand for the instruments was declining rapidly, but it
didn't make that information available to clients, said the letter.

In February of 2008, nearly 900 Charles Schwab customers got stuck
with $789 million of securities, according to a person familiar with
the matter. Schwab owes a small fraction of that amount now, said
people familiar with the matter.

The letter cites an email exchange between Schwab executives where
one writes there is "brand risk of course" if Schwab customers "can't
get...access to their funds."

The letter reveals another exchange in which an executive wrote in
an email after learning of failed auctions, "This will definitely hit
the Bond Buyer (maybe not until Friday) and it will likely hit the
Journal as well. B[ank] of A[merica] has told us that they are not
telling anyone today [that] there has been a failed auction -- but it
will likely come out tomorrow when the actual settlement occurs."

Bank of America settled last October with regulators and agreed to buy back $4.5 billion in securities from its clients.