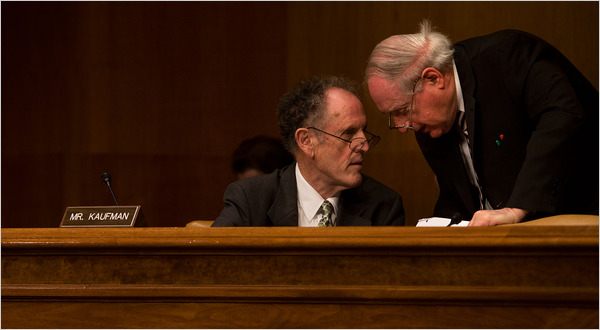 One question has vexed the Obama administration and Congress since
the start of the financial
crisis: how to prevent big bank bailouts.

In the last year and a half, the largest financial institutions have
only grown bigger, mainly as a result of government-brokered mergers.
They now enjoy borrowing at significantly lower rates than their smaller
competitors, a result of the bond markets' implicit assumption that the
giant banks are "too big to fail."

In the sweeping legislation before the Senate, there is no attempt to
break up big banks as a means of creating a less risky financial system.
Treasury Department and Federal Reserve officials have rejected calls for
doing so, saying bank size alone is not the most important threat.

Instead, the bill directs regulators to compel the largest banks to hold
more capital as a cushion against losses. It sets up a procedure
intended to allow big banks to fail, with the cost borne not by
taxpayers but by the biggest financial institutions.

As the debate over the regulatory overhaul heated up this week, a
populist minority in both Congress and the Fed requested a revisit to
the size issue. They would like to go beyond a provision in the bill,
suggested by Paul A.
Volcker, the former Fed chairman, and supported by President
Obama, that would seek to keep banks from growing any larger but not
force any to shrink.

"By splitting up these megabanks, we by definition will make them
smaller, safer and more manageable," Senator Edward E. Kaufman Jr.,
Democrat of Delaware, said in a speech Tuesday.

The president of the Federal Reserve Bank of Dallas, Richard W. Fisher,
broke ranks with most of his colleagues within the central bank last
week, declaring, "The disagreeable but sound thing to do regarding
institutions that are too big to fail is to dismantle them over time
into institutions that can be prudently managed and regulated across
borders."

There also has been concern about the size of banks from Republicans who
believe in free-market principles. Several senators from the South and
West - Richard
C. Shelby of Alabama, Johnny
Isakson of Georgia, John Cornyn
of Texas and John McCain
of Arizona - have expressed a desire to revisit the 1999 repeal of the Glass-Steagall Act, the Depression-era law
that separated commercial and investment banking.

Alan
Greenspan, the former Fed chairman, has entertained the idea of
splitting up the banks but has stopped short of advocating it.

He added: "In 1911, we broke up Standard Oil. So what happened? The
individual parts became more valuable than the whole. Maybe that's what
we need."

In January, the White House embraced a proposal by Mr. Volcker that
would ban banks that take customer deposits from running their own
proprietary trading operations, or making market bets with their own
money. It would also limit the share of all financial liabilities that
any one institution can hold - besides deposits - but it would be up to
regulators to set the limit.

A federal law enacted in 1994 already addresses size by restricting any
bank from holding more than 10 percent of the nation's deposits,
although several of the largest banks have been granted waivers from
that requirement or used loopholes to evade its intent.

The Volcker proposal resembled an amendment by Representative Paul E.
Kanjorski, Democrat of Pennsylvania, that would let regulators dismantle
financial companies so large, interconnected or risky that their
failure would jeopardize the entire system. The amendment was part of a
regulatory overhaul that the House adopted in December, largely along
party lines, and is also in the Senate version in a modified form.

At a hearing on Tuesday about the bankruptcy of Lehman
Brothers, which caused credit markets to seize up in September 2008,
the Fed chairman, Ben S.
Bernanke, reiterated that his preference was to limit the risky
behavior of banks rather than break them up.

"Through capital, through restrictions in activities, through liquidity
requirements, through executive
compensation, through a whole variety of mechanisms, it's important
that we limit excessive risk-taking, particularly when the losses are
effectively borne by the taxpayer," Mr. Bernanke said.

But when Mr. Kanjorski pressed him on whether regulators should be
allowed to break up big banks, he replied, "It's something that would
be, on the whole, constructive."

Representative Brad Sherman, Democrat of California, added: "We should
go further and not just allow, but require, regulators to break up firms
that have reached a certain size."

What is not in doubt is that the crisis increased the size and
importance of the six largest banks: Bank
of America, Citigroup,
JPMorgan Chase, Wells
Fargo, Goldman Sachs and Morgan
Stanley.

In 1995, the assets of the six largest banks totaled 17 percent of the
nation's gross domestic product. Now they have assets
amounting to 63 percent of G.D.P. Measured another way, the share of
all banking industry assets held by the top 10 banks rose to 58 percent
last year, from 44 percent in 2000 and 24 percent in 1990.

Gary H. Stern, the co-author of "Too Big to Fail: The Hazards of Bank
Bailouts," said policy makers largely ignored the warnings contained in
the title when the Brookings
Institution published the book in 2004.

Mr. Stern, who retired last year as president of the Minneapolis Fed, is
lukewarm about the bill. "It tries to address the problem but it's half
a loaf at best," he said. "It doesn't address the incentives that gave
rise to the problems in the first place."

In Mr. Stern's view, ending "Too Big to Fail" should subject uninsured
creditors - bondholders - to losses if the bank fails. Without that
fear, he said, unsecured creditors will not exert discipline on the
banks by monitoring their risk-taking and pricing their loans
appropriately. Mr. Stern said the bill in the Senate is vague about how
such creditors would be treated if the government were to seize and
dismantle a failing bank.

Simon Johnson, an M.I.T. professor, has been leading the intellectual
charge to break up banks. In his book "13 Bankers," he urged that no
financial institution be permitted to control more than 4 percent of
G.D.P. and no investment bank more than 2 percent. All six of the big
financial institutions exceed those limits.

Forbidding taxpayer bailouts, as the Senate bill proposes, is worth
little more than the paper it is on, Mr. Johnson argues. "When push
comes to shove, will the government save these guys?" he asked. "I don't
know anybody who doesn't think they'd save Goldman if Goldman were to
suddenly run into trouble."