US: An Inconvenient Bag

It's manufactured in China, shipped
thousands of miles overseas, made with plastic and could take years to
decompose. It's also the hot "green" giveaway of the moment: the
reusable shopping bag.

The bags usually are printed with environmental slogans as well as
corporate logos and pitched as earth-friendly substitutes for the
billions of disposable plastic bags that wind up in landfills every
year. Home Depot distributed 500,000 free reusable shopping bags last
April on Earth Day, and Wal-Mart gave away one million. One line of
bags features tags that read, "Saving the World One Bag at a Time."

But well-meaning companies and consumers are
finding that shopping bags, like biofuels, are another area where it's
complicated to go green. "If you don't reuse them, you're actually
worse off by taking one of them," says Bob Lilienfeld, author of the
Use Less Stuff Report, an online newsletter about waste prevention. And
because many of the bags are made from heavier material, they're also
likely to sit longer in landfills than their thinner, disposable
cousins, according to Ned Thomas, who heads the department of material
science and engineering at Massachusetts Institute of Technology.

Used as they were intended, the totes can be an environmental boon,
vastly reducing the number of disposable bags that do wind up in
landfills. If each bag is used multiple times -- at least once a week
-- four or five reusable bags can replace 520 plastic bags a year, says
Nick Sterling, research director at Natural Capitalism Solutions, a
nonprofit focused on corporate sustainability issues.

Just as digital music downloads were the giveaway of choice last
year, reusable shopping bags are the new "it" freebie. Earlier this
month, Google handed out 525 nylon bags bearing the company's logo at
its "Zeitgeist" conference, a meeting of business and political leaders
held at its campus in Mountain View, Calif. The Sundance Institute gave
out 12,000 fabric bags at its annual film festival earlier this year.
Elisa Camahort Page, cofounder of BlogHer, an online community for
women bloggers, says she even gave away 150 reusable bags to guests at
her wedding last year.

Fueling
the reusable-bag boom is the growing unpopularity of the ubiquitous
throwaways known as T-shirt bags, so-called because the handles look
like the top of a sleeveless T-shirt. An estimated 100 billion plastic
bags are thrown away in the U.S. every year, according to the
Worldwatch Institute.

Last year, San Francisco became the first U.S. city to ban the bags
from supermarkets and chain drug stores, and this month, the city of
Westport, Conn., banned most kinds of plastic bags at retail checkout
counters. Boston, Baltimore and Portland, Ore., are also considering
bans.

Earlier this year, Whole Foods Market grocery stores stopped using
the T-shirt bags, and now offer paper bags or sell reusable totes
priced at 99 cents to $29.99. Next month, Ikea will also discontinue
their use, forcing customers to carry their purchases to their cars,
bring bags from home or buy the chain's 59-cent reusable blue plastic
substitute.

Such efforts are helping make reusable totes the nation's
fastest-growing fashion accessory, with sales this year up 76% to date
over last year, according to Marshal Cohen, chief industry analyst at
the market researcher NPD Group. At Bags on the Run, an online-based
Phoenix company that sells nonwoven polypropylene bags, sales this year
are up 1,000% to date over last year, according to Aerin Jacob, senior
vice president of business development. Eco-Bags Products, which sells
bags made of fabric, recycled materials and plastic, had $2.2 million
in sales in 2007, a 300% increase over 2006, says Sharon Rowe, who
heads the Ossining, N.Y.-based company. ChicoBag, in Chico, Calif., has
tripled sales of its $5 reusable polyester tote this year, says
president Andy Keller. 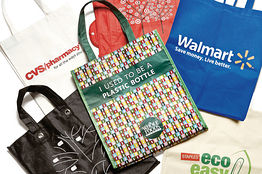 
The nonwoven polypropylene bags, made in China, should last about five years, says spokesman Steve Linders.


The bags are made in China from nonwoven polypropylene. The materials
are recyclable and decompose without contaminating groundwater, says
spokeswoman Erin Pensa.


This new bag costs 50 cents but has less recycled content than
Wal-Mart's $1 reusable bag. The company says it wanted to offer
shoppers a cheaper option.


The bags are made in China from nonwoven polypropylene that contains 30% recycled material, says spokesman Mike Black.


The bags are made from 80% recycled plastic. The chain has eliminated disposable plastic bags from its stores.


The nonwoven polypropylene bags, made in China, are part of a larger green initiative, says spokeswoman Kelly Groehler.

Grab That Tote, Use That Bag

Tips for getting into the habit of reusing the reusables:

Starting Monday, Target will move
displays of its own 99-cent totes to the checkout lanes, to boost the
bags' sales. On Wednesday, Rite Aid, which currently sells its branded
bags in selected markets, will start stocking them in all of its 4,930
stores. CVS expects to have three million of its own bags in the
marketplace within the next year.

Finding a truly green bag is challenging. Plastic totes may be more
eco-friendly to manufacture than ones made from cotton or canvas, which
can require large amounts of water and energy to produce and may
contain harsh chemical dyes. Paper bags, meanwhile, require the
destruction of millions of trees and are made in factories that
contribute to air and water pollution.

Many of the cheap, reusable bags that retailers favor are produced
in Chinese factories and made from nonwoven polypropylene, a form of
plastic that requires about 28 times as much energy to produce as the
plastic used in standard disposable bags and eight times as much as a
paper sack, according to Mr. Sterling, of Natural Capitalism Solutions.

Some, such as the ones sold in Gristedes stores in New York that are
printed with the slogan "I used to be a plastic bag," are misleading.
Those bags are also made in China from nonwoven polypropylene and have
no recycled content. Stanley Joffe, president of Earthwise Bag Co., the
Commerce, Calif., company that designed the bags, says the slogan is
meant to point out that the bag itself is reusable, taking the place of
a disposable plastic bag.

Some plastic bags are, in fact, made with recycled materials. The
polypropylene bags at Staples are made from 30% recycled content,
according to company spokesman Mike Black. Target sells six types of
bags, including a $5.99 variety made from recycled plastic bags, says
spokesman Steve Linders.

And yesterday, at the Clinton Global Initiative, a public-policy
gathering in New York of business and political leaders, Wal-Mart
pledged to reduce plastic bag waste by about 33% in every store
world-wide in the next five years. Starting next month, the company
will sell a new blue reusable plastic bag with a small amount of
recycled material for 50 cents, half the price of its current black
bag, which is 85% recycled plastic, says spokeswoman Shannon Frederick.

Getting people to actually use the bags is another matter.
Maximizing their benefits requires changing deeply ingrained behavior,
like getting used to taking 30-second showers to lower one's energy and
water use. At present, many of the bags go unused -- remaining stashed
instead in consumers' closets or in the trunks of their cars. Earlier
this year, KPIX in San Francisco polled 500 of its television viewers
and found that more than half -- 58% -- said they almost never take
reusable cloth shopping bags to the grocery store. 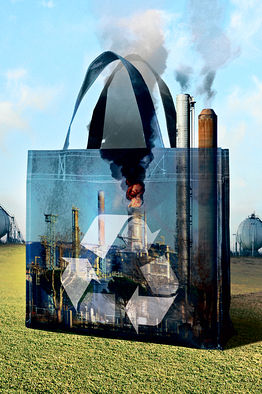 Phil Rozenski,
director of environmental strategies at the plastic bag maker Hilex
Poly Co., believes even fewer people remember to use them. Based on
consumer surveys conducted by the company, he says roughly the same
number of people reuse their bags as bring disposable bags back to the
grocery store for recycling -- a figure he puts at about 10% of
consumers, according to industry data.

This month at the Stanford Graduate School of Business, marketing
professor Baba Shiv dedicated the first day of a weeklong seminar on
green marketing to the "road blocks" facing reusable bags. He says it
can take "years and decades" for consumers to change their shopping
habits, and only when there's a personal reward or an obvious taboo
associated with the change: "Is it taboo yet to be carrying plastic
bags? I don't think so." Mr. Shiv also says that according to surveys
done by his graduate students, many shoppers say they are less likely
to carry a retailer's branded reusable bag into a competing store.
"What these bags are doing is increasing loyalty to the store," he says.

Dan Fosse, president of Cambridge, Minn.-based Innovative Packaging,
produces a line of bags called SmarTote. Each one comes with a bar code
that allows stores to track whether it is being reused. The idea, says
Mr. Fosse, whose bags carry the slogan "Saving the World One Bag at a
Time," is that companies can offer prizes or other incentives to
customers who can prove their bag isn't just collecting dust at home.

Sarah De Belen, a 35-year-old mother of two from Hoboken, N.J., says
she uses about 30 or 40 plastic bags at the grocery store every week.
Late last year, she saw a woman at the supermarket with a popular
canvas tote by London designer Anya Hindmarch and promptly purchased
one online for about $45.

But Ms. De Belen says she soon realized she'd need 12 of them to
accommodate an average grocery run. "It can hold, like, a head of
lettuce," she says. Besides, she adds, it's too nice to load up with
diapers or dripping chicken breasts.

Write to Ellen Gamerman at ellen.gamerman@wsj.com