The U.S. Nuclear Regulatory Commission told six utility companies
that they have until year-end to explain how they will remedy
shortfalls in nuclear decommissioning funds. The under funding reflects
reduced returns on investments.

The NRC didn't divulge the collective shortfall but said amounts
ranged from $12 million to $204 million for each of 26 reactors at 18
sites on the list -- one-quarter of the nation's reactors in service.
That suggests the total shortfall is at least $500 million and,
possibly, several billion dollars.

Companies owning the nation's 104 power reactors had set aside $41
billion in decommissioning funds, which they controlled, at the end of
2008. 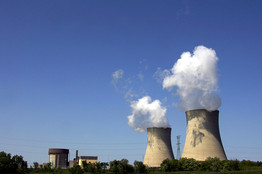 Reserves to decommission 26 nuclear plants, such as Exelon's Byron, Ill., reactor, are inadequate, the NRC said.

Scott
Burnell, a spokesman for the NRC, said the number in arrears is "more
than normal" and that the situation "needs to be resolved in the near
future."

A spokesman for FPL said his company is "fully committed to meeting
our obligations" and blamed "market conditions" for the under funding
for its Point Beach and Duane Arnold units in Two Creeks, Wisc., and
near Cedar Rapids, Iowa.

The NRC requires companies to sock money away to cover the
anticipated cost of taking plants out of service and, eventually,
razing them. Roughly half the nation's reactors have gotten 20-year
extensions on original 40-year licenses, meaning that decommissioning
periods have been pushed off.

The NRC requires operators to update it on decommissioning funds at
least every two years and the latest batch of public reports was filed
in March and April.

"We do have some time to recover that shortfall," said Adrian
Heymer, senior director of strategic programs for the Nuclear Energy
Institute, a trade association. Companies have up to 60 years to tear
down plants, once they are taken out of service.

An Exelon spokesman said his firm cured shortfalls at three reactors recently but still must satisfy the NRC on two plants.