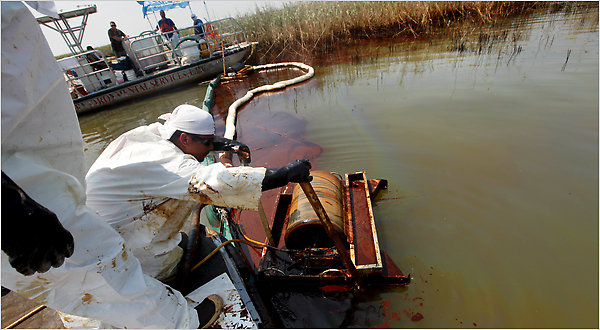 A contractor operated an oil skimmer in the
Pass-a-Loutre area of the Mississippi River Delta.

For weeks, it was a disaster in abstraction, a threat floating
somewhere out there.

Not anymore. In the last week, the oil slick
in the Gulf of Mexico has revealed itself to an angry and desperate
public, smearing tourist beaches, washing onto the shorelines of sleepy
coastal communities and oozing into marshy bays that fishermen have
worked for generations. It has even announced its arrival on the
Louisiana coast with a fittingly ugly symbol: brown pelicans, the state
bird, dyed with crude.

More than a month has passed since the Deepwater Horizon drilling rig
blew up, spewing immeasurable quantities of oil into the Gulf of Mexico
and frustrating all efforts to contain it. The billowing plume of
undersea oil and water has thwarted the industry's well-control efforts
and driven government officials to impotent rage.

It has demonstrated the enduring laxity of federal regulation of
offshore operations and has shown the government to be almost wholly at
the mercy of BP, the
company leasing the rig, to provide the technology, personnel and
equipment to stop the bleeding well.

Senators and administration officials visiting the southern Louisiana
town of Galliano lashed out again at BP on Monday, saying they were
"beyond patience" with the company. The day before, Interior Secretary Ken Salazar,
who early in the crisis vowed to "keep the boot on the neck" of BP,
threatened to push the company out of the way.

But on Monday, Mr. Salazar backed off, conceding to the reality that BP
and the oil companies have access to the best technology to attack the
well, a mile below the surface, even though that technology has proved
so far to have fallen short of its one purpose. The government's role,
he acknowledged, is largely supervisory and the primary responsibility
for the spill, for legal and practical reasons, remains with the
company.

"The administration has done everything we can possibly do to make sure
that we push BP to stop the spill and to contain the impact," Mr.
Salazar said. "We have also been very clear that there are areas where
BP and the private sector are the ones who must continue to lead the
efforts with government oversight, such as the deployment of private
sector technology 5,000 feet below the ocean's surface to kill the
well."

Oil industry experts said they did not take seriously the sporadic
threats by the administration that the federal government might have to
wrest management of the effort to plug the well from BP. The experts
said that the Interior and Energy Departments do not have engineers with
more experience in deepwater drilling than those who work for BP and
the array of companies that have been brought into the effort to stem
the leak.

"It's worse than politics," said Larry Goldstein, a director of the Energy
Policy Research Foundation, which is partly financed by the oil
industry. "They have had the authority from Day 1. If they could have
handled this situation better, they would have already."

As the verbal warfare between officials and company executives
escalated, the slick from the April 20 well blowout continued to spread
in billowing rust-colored splotches in the gulf, raising urgent questions
about what lay beneath.

On land, shrimpers were stuffing their catch into coolers in hopes of
having some in store if the season ends altogether. Hotel owners all
along the gulf were trying to persuade tourists to keep their vacation
plans. But as they looked to BP and the authorities for help, or at
least direction, there has only been frustration.

"I never thought it would come to this," said Ryan Lambert, a charter
boat operator in Buras, La., who spoke to the federal delegation on
Monday. "My guys look to me and say 'What do I do, boss?' And I don't
have an answer."

Several things have become clear over the past month. Neither BP nor the
government was prepared for an oil release of this size or at this
depth. The federal Minerals Management Service, charged with
overseeing offshore oil development, has for too long served as a handmaiden of
industry. Laws governing deepwater drilling have fallen far behind
the technology and the attendant risks. And no one can estimate the
extent of the economic and environmental damage, or how long it will
last.

"Just under 70 miles of our coast have been hit by oil," said Gov. Bobby Jindal of Louisiana, a
Republican, who criticized the disjointed response effort that he said
has allowed oil to come ashore unnecessarily. "Let's make no mistake
that what is at threat here is our way of life."

The crude has been flowing at a rate still unknown nearly a mile below
the surface, escaping in quantities far greater than the small amount of
oil that has been burned off, collected with booms or sucked from the
broken drill pipe lying on the ocean floor.

Using conservative government and BP estimates, more than seven million
gallons of oil have been released from the crippled well, nearing the
size of the spill from the Exxon Valdez in 1989. Independent estimates
of the gulf spill place it many times higher than the official figure,
rendering the statistics about how much oil has been collected thus far
nearly useless in gauging the effectiveness of the response.

For weeks BP tried without success to reactivate the seal-off valves on
the dead blowout preventer, the tower of pipes designed to shut the
well. Then it lowered a 40-foot
steel containment chamber in an effort to funnel escaping oil to a
ship on the surface, but that failed when an icy slush of gas and water
stopped up the device.

In recent days, BP attached a mile-long tube into the leaking well
designed to divert oil to a drill ship before it leaked into the gulf.
But the company said the rate it has been able to capture has varied
from day to day, between 1,360 and 3,000 barrels, far below even the
most conservative estimates of how much oil was leaking.

The recriminations over the performance of BP and the Obama
administration could subside if the latest effort to kill the well, now
scheduled for Wednesday morning, succeeds.

In a maneuver called a "top kill," BP is planning to pump heavy drilling
fluids twice the density of water through two narrow lines into the
blowout preventer to essentially plug the runaway well.

"The top kill operation is not a guarantee of success," warned Doug
Suttles, BP's chief operating officer, who added that it had never been
tried before in deep water under high pressures.

"If the government felt there were other things to do it is clearly
within the power of the government to do that," Mr. Suttles said.
"Everyone is very, very frustrated."

Mr. Suttles said that if the top kill did work, the leak could be
stopped as early as Wednesday night. Then engineers could either fill
the well with cement or replace the failed blowout preventer.

Shortly after officials lambasted his company in Galliano, Tony Hayward,
the chief executive of BP, invited reporters to follow as he walked
along the beach at Port Fourchon, which was crowded with workers in
yellow Hazmat suits picking up shovelfuls of chocolate-colored crude off
the sand.

Asked about the top kill, Mr. Hayward acknowledged that it was far from a
sure fix.

"We rate the probability of success between 60 percent and 70 percent,"
he said. "Beyond that, there is a third and fourth and fifth option
around both containment and elimination."