In June 2005, the Securities and Exchange Commission made a secret plea
to Antigua's top banking regulator, Leroy King: help investigate
whether Stanford International Bank, based in the Caribbean money
haven, was engaged in a huge fraud of its investors. 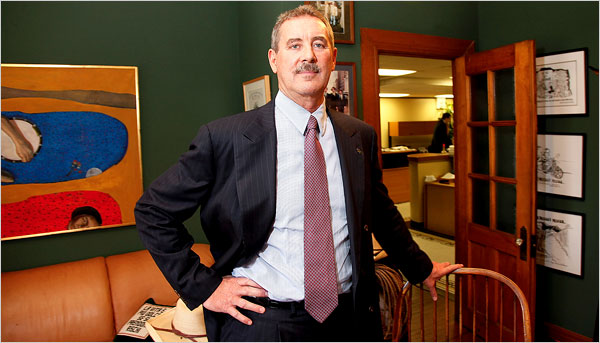 R. Allen Stanford, shown in the Houston office of his attorney, Dick DeGuerin, in April, surrendered to the F.B.I. on Thursday.

But unknown to the agency, someone else had gotten to him first. R. Allen Stanford,
the Texas billionaire whose bank made him a powerful figure in Antigua,
had already started making a series of payments to Mr. King that would
eventually top $100,000 in exchange for his help in warding off the
S.E.C.

Those accusations were contained in an indictment unsealed Friday by
the Justice Department, which accused Mr. Stanford of operating a
multibillion-dollar Ponzi scheme
with the help of the bank's top lieutenants - as well as with the
regulator who was supposed to be scrutinizing Mr. Stanford's
operations.

"Nothing can go more to the heart, and attack the heart of
regulation and law enforcement," said Lanny A. Breuer, the assistant
attorney general of the agency's criminal division, than when
regulators "receive bribes, so that they don't do what they're
entrusted to do."

The Justice Department said that while Mr. Stanford was defrauding
about 30,000 investors of $7 billion, he was paying Mr. King thousands
of dollars a month to conduct fake audits aimed at assuring the bank's
investors, and American regulators, that its finances were sound.

Mr. King, who has been suspended from his role as the chief
executive of Antigua's Financial Services Regulatory Commission, is
also accused of showing Mr. Stanford the S.E.C.'s inquiries as they
came in so that Mr. Stanford and his lieutenants could "dictate the
substance, and even the content" of responses, which Mr. King then
returned to the S.E.C. on the Antiguan banking regulators' letterhead.

"Instead of buying the safe and sound investments he promised his
clients, Stanford bought Antigua's top securities cop," Robert Khuzami,
the S.E.C.'s enforcement director, said in a statement. "While Stanford
quarterbacked his massive Ponzi scheme, he paid the referee to spy on
the huddles and provide an insider's play-by-play of the S.E.C.
investigation."

The charges were among several that detailed how Mr. Stanford and
his associates supposedly exaggerated the growth of assets in its
reports, to $8.5 billion in December 2008, from $1.2 billion in 2001.
Nearly $5 billion of that, according to the indictment, was actually
overstated stakes in properties and notes on loans to Mr. Stanford. The
bank also diverted more than $1.6 billion into undisclosed personal
loans to Mr. Stanford, the indictment said, and engaged in wire and
mail fraud and conspiracy to obstruct an S.E.C. investigation.

Also named in the indictment were Laura Pendergest-Holt, the chief investment officer for the Stanford Financial Group,
who was previously indicted in the case; its chief accounting officer,
Gilberto Lopez; and its global controller, Mark Kuhrt. Ms.
Pendergest-Holt has declared her innocence. James Davis, the chief
financial officer, who is cooperating with prosecutors, was not
indicted, but his involvement in various offenses was outlined in the
indictment.

The action had been expected since the S.E.C. filed complaints
against Mr. Stanford and other senior executives in February, closing
his operations based in Houston. But it came as a new low point for a
man who clawed his way out of rural Texas to build a personal fortune
of more than $2 billion, and whose lavish spending and lifestyle in
Antigua made him influential with the island's top politicians - as
well as regulators like Mr. King.

If convicted on all charges, Mr. Stanford faces up to 250 years in prison.

Dick DeGuerin, Mr. Stanford's lawyer, said in a statement that his
client was "confident a fair jury will find him not guilty of any
criminal wrongdoing."

Mr. King, who holds both an American and an Antiguan passport, was
not available for comment. But in an interview in February, just after
Mr. Stanford's offices in Houston were raided by federal authorities,
Mr. King said: "I am absolutely sure that my banking system is clean."

Mr. Breuer, the assistant attorney general, said that he believed
that Mr. King was still in Antigua and that he could be extradited to
the United States. He added that the Justice Department was working
closely with Antiguan authorities, who he said were being extremely
cooperative.

Mr. Stanford was taken into custody Thursday night when federal
agents came to arrest him at his girlfriend's house in Virginia. He
spent the night in jail and appeared in federal court on Friday.

A receiver appointed when the S.E.C. first took action against Mr.
Stanford has so far found less than $2 billion in recoverable assets
related to the scheme. More than $300 million in investor funds has
been frozen in foreign banks, but Mr. Breuer estimated that $1 billion
cannot be found.

A federal law enforcement official who was not authorized to speak
publicly about the case said that investigators were unable to track
billions of dollars more in missing funds because much was wasted on a
variety of risky investments, as well as cricket sponsorships, jets,
yachts and other accouterments of Mr. Stanford's lifestyle. Much more
could still be hidden in bank accounts. He added that it had been
difficult to locate many large depositors, some of whom are believed to
be Latin Americans who were hiding money to avoid paying taxes in their
home countries.

Tim Johnson, the United States attorney for the Southern District of
Texas, said that authorities would "likely be unable to restore all of
the money that has been lost by the victims of these offenses that have
been charged."

In a telephone interview Friday, the attorney general of Antigua
and Barbuda, Justin Simon, said he would consider any United States
request for extradition of Mr. King, who has been on leave since March.
Mr. Simon said the Antiguan government was conducting an independent
investigation of the official.

"This concerns me greatly because it reflects adversely on the
commission," he said, referring to the Financial Services Regulatory
Commission. But, he added: "I think I am satisfied" that Mr. King "hid
things" from the commission's board "and got involved in a personal
relationship with Stanford."

He said it was "a distinct possibility" that Mr. King would also be prosecuted in Antigua.

S.E.C. officials said that while foreign nationals were charged with
some frequency, it was rare if not unprecedented to charge a foreign
financial regulator with fraud.

Before becoming Antigua's top bank regulator, Mr. King worked for 25
years as a banker in the United States, according to an announcement
published when he was appointed to Antigua's regulatory commission. He
began his career at the National Bank of Westchester in New Rochelle,
N.Y., and retired from the industry as a vice president for Bank of America.

The Justice Department indictment shows that from 2005 through early
2009, Mr. King made more than 20 deposits, ranging from $2,000 to
$9,700, with regular frequency into accounts he held at eight different
banks along the East Coast of the United States.

Soon after the first deposits shown in the indictment were recorded
in 2005, Mr. King told the S.E.C. that if Mr. Stanford were running a
Ponzi scheme, his agency's examinations would have detected it, even
though he knew he had ordered his own agency not to scrutinize Stanford
International Bank's operations and finances, according to the
indictment.

Fast-forward to February of this year, when the S.E.C. announced it
was going after Mr. Stanford. Mr. King began transferring large amounts
of money from an account held at a bank in New York to an Antiguan
account. On Feb. 23, according to the indictment, he transferred
$150,000 to Antigua. Two days later, the S.E.C. contacted Mr. King to
ask for his help in determining the size and scope of the fraud at
Stanford International Bank.

On March 2, Mr. King transferred another $410,000 from his New York
bank account to Antigua. The day after, Mr. King sent the S.E.C. a
letter with his reply: His agency, Mr. King wrote, had "no authority to
act in the manner requested and would itself be in breach of law if it
were to accede to your request."