US/WORLD: Smokeless Tobacco to Get Push by Venture Overseas

The deal offers both companies an opportunity to benefit from sales
of smokeless tobacco, which is seen as a growth product because it is
less dangerous than cigarettes. It also signals the possibility of an
intensified industry effort to lift government bans on sales of snuff
-- the largest smokeless category -- in much of the European Union,
Australia, New Zealand and other potentially lucrative markets. Swedish
Match also said the venture may develop smokeless products such as
chewing gum. 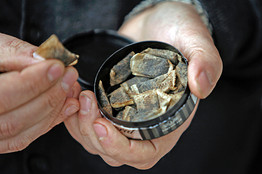 Snus, a smokeless tobacco, is now banned in the EU except in Sweden.

The
venture combines a world-wide giant in smokeless, Swedish Match, with
the world's second-largest purveyor of cigarettes, PMI, an Altria
Inc. spinoff. PMI holds the rights to sell the Marlboro brand owned by
Altria's giant cigarette unit, Philip Morris, outside the U.S.

The venture could help PMI enter the smokeless market and help
Swedish Match develop a global presence. In a joint press release, the
two companies said they would seek to expand globally outside
Scandinavia and the U.S. The announcement extends a trend of cigarette
companies teaming with purveyors of smokeless tobacco. In the U.S.,
Philip Morris last month completed the $10.3 billion acquisition of UST
Inc., the nation's largest smokeless purveyor. And the nation's No. 2
cigarette maker, Reynolds American, has entered the smokeless market
via acquisition and new-product development. Sales of smokeless tobacco
in the U.S. are growing at about 5% a year as sales of cigarettes
decline.

Research has shown that Swedish-style smokeless tobacco, called
snus, is substantially safer than cigarettes and potentially effective
in helping smokers stop. In a joint press release Tuesday, Swedish
Match and PMI said "there is a role for snus to play in tobacco harm
reduction."

The combination could bring more pressure on governments to lift
bans on snuff, which includes snus, in several countries. The bans,
enacted amid the heat of battle between public health officials and
cigarette companies reflected a desire to limit tobacco's reach. But a
growing number of public health officials argue that the bans deprive
cigarette addicts of a way to switch to a safer variety of tobacco. In
Sweden, the rate of cigarette smoking among men has declined sharply as
smokeless usage has climbed.

In the past, Swedish Match sought a repeal or amendment of the EU
ban, only to be rejected as a tobacco company seeking to extend its
reach. But while Swedish Match is predominantly a smokeless tobacco
purveyor, PMI is a cigarette company, and that could make its leap into
smokeless tobacco tricky for regulators.

"When you have a giant cigarette company saying we would like to
market a product that bears a tiny fraction of the risk of what we're
marketing now, how do you say no without giving that company a huge
legal and public-relations victory?" asks David Sweanor, an academic
lawyer and tobacco-control expert in Canada and Britain who has been a
consultant to plaintiffs suing cigarette makers. Mr. Sweanor supports
repealing smokeless bans.

Debate about the snus ban is also heated in Australia. In an October
2007 letter to the British medical journal Lancet, a group of
public-health researchers from the University of Queensland noted that
in Australia, "snus is completely banned from sale. Yet new tobacco
products can be introduced to the market so long as they are smoked."

A Swedish Match spokesman in Stockholm said the venture isn't
expected or designed to bring down the EU ban. In spite of the
scientific evidence, spokesman Henrik Brehmer said, regulators "still
say they believe it is a dangerous product."

Many public health officials in countries that ban smokeless tobacco
argue that pitching it as a reduced-harm product could make it
attractive to nonsmokers.

Moreover, the fact that smokers in large numbers have switched in
only one country -- Sweden -- means that "advocates for liberalization
of access...are almost certainly overhyping the potential for
widespread adoption" among smokers, Simon Chapman, a professor of
public health at the University of Sydney, argued last year in the
Medical Journal of Australia.