Bruce Marks doesn't bother being diplomatic. A campaigner on behalf
of homeowners facing foreclosure, he was on the phone one day in March
to a loan executive at Bank of America Corp.

"I'm tired of borrowers being screwed!" Mr. Marks yelled into the
phone. "You're incompetent!" Before hanging up, he threatened to call
bank CEO Kenneth Lewis at home to complain about the loan executive.

Mr. Marks's nonprofit organization, Neighborhood Assistance Corp. of
America, has emerged as one of the loudest scourges of the banking
industry in the post-bubble economy. It salts its Web site with photos
of executives it accuses of standing in the way of helping homeowners
-- emblazoning "Predator" across their photos, picturing their homes
and sometimes including home phone numbers. In February, NACA, as it's
called, protested at the home of a mortgage investor by scattering
furniture on his lawn, to give him a taste of what it feels like to be
evicted. 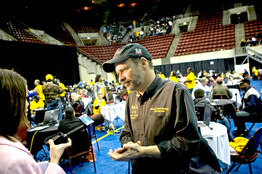 Housing
Advocate Bruce Marks of the Neighborhood Assistance Corp. of America at
a 'Save the Dream' event he organized in Columbia, S.C., in March to
help troubled homeowners get their mortgage payments reduced.

In
the 1990s, Mr. Marks leaked details of a banker's divorce to the press
and organized a protest at the school of another banker's child. He
says he would use such tactics again. "We have to terrorize these
bankers," Mr. Marks says.

Though some bankers privately deplore his tactics, Mr. Marks is a
growing influence in the lending industry and the effort to curb
foreclosures. NACA has signed agreements with the four largest U.S.
mortgage lenders -- Bank of America, Wells Fargo & Co., J.P. Morgan Chase & Co. and Citigroup
Inc. -- in which they agree to work with his counselors on a regular
basis to try to arrange lower payments for struggling borrowers. NACA
has made powerful political friends, such as House majority whip James
Clyburn of South Carolina, and it receives federal money to counsel
homeowners.

Some 1.7 million U.S. households will lose their homes in
foreclosure this year, according to a forecast by Moody's Economy.com,
versus under 500,000 a year early in the housing boom. Banks want to
show they're making every effort to keep people in their homes. That
can mean working with housing-advocacy groups that routinely bash the
industry, increasing the clout of such nonprofits. Less certain is
whether these groups can translate their new leverage into long-term
influence over how mortgage lenders treat customers.

"We have the opportunity to change how lending gets done in this
country," says Mr. Marks, whose group is itself a mortgage broker and
has 40 offices staffed with housing counselors. He favors a return to
more traditional standards, with full documentation of income and the
same fixed interest rate for everyone. 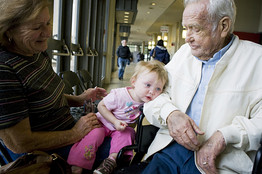 Barbara
and Joseph Green feed M&M's to their granddaughter while waiting to
speak with a counselor at an NACA event in Columbia, S.C.

Instead
of relying on credit scores, he thinks lenders should look into the
reasons for any late payments in prospective borrowers' past and
prepare renters for the responsibilities of home ownership. Then, if
people are given a loan they can afford, they shouldn't be required to
make a down payment, he argues.

Critics doubt some of these changes would be helpful. Having to use
a single interest rate for all would make banks less likely to lend to
people with blemished credit records, says Richard Riese, an executive
at the American Bankers Association.

A single rate also could lead to higher rates for everyone, adds
John Courson, chief executive of another trade group, the Mortgage
Bankers Association.

Mr. Courson declined to comment on Mr. Marks. "You're not going to drag me in there," he said.

For now, NACA's main focus is fighting foreclosure, and the
53-year-old Mr. Marks pursues it relentlessly. NACA holds mass "Save
the Dream" gatherings, flying in hundreds of counselors to work with
borrowers who hope to restructure their mortgages.

At one in Columbia, S.C., in March, a line of homeowners stretched
around an arena waiting to meet counselors in canary-yellow T-shirts
reading "Financial Predators Beware." Mr. Marks, dressed in black and
wearing a NACA cap, circled the arena with a bullhorn. "We're gonna get
it done!" he bellowed.

Erick Exum, a NACA official, told those present: "What happened is
not your fault. The mortgage crisis is the result of abuses and
exploitation by Wall Street." Even so, he said, they might have to make
sacrifices: "If you have a car payment and a boat payment, the boat may
not make sense."

Counselors discussed borrowers' incomes and spending, calculating
how big a monthly payment each could afford. For most, NACA later came
up with a proposal to lower the interest rate, reduce the principal or
both. NACA took the proposals to banks -- many of which had someone at
the event -- and negotiations often followed.

While in Columbia, Mr. Marks made his angry cellphone call to Bank
of America executive Steve Bailey. Pacing a hall, Mr. Marks accused Mr.
Bailey of reneging on the bank's agreement with NACA by failing to
reduce borrowers' payments on their second liens, in addition to their
first mortgages.

Mr. Bailey says Mr. Marks was mistaken about what the bank had
agreed to. "I think Bruce was having a bad day," Mr. Bailey says. He
and Mr. Marks agree that their dispute has since been resolved, but
differ on the details.

NACA seeks to limit mortgage payments to whatever a borrower can
afford, and doesn't favor stretching out payment periods. That
contrasts with a loan-modification plan pushed by the Obama
administration, which aims to limit payments to 31% of income.

One borrower at Columbia was Kenneth Brown, a truck driver from
Richmond, Va., who had driven over 300 miles to attend. Though he said
he was still current on his mortgage, Mr. Brown hoped to get his
monthly payment of about $1,600 cut in half by lowering his loan's
12.5% interest rate. "I'm not leaving till I get something in my hand,"
he said as he sat in the arena.

Two
months later, Mr. Brown said he had given up on waiting for NACA to
find a solution and was trying on his own to refinance. Mr. Marks said
NACA tried to help Mr. Brown but ran into complications documenting his
income as a self-employed trucker.

The Columbia event drew people from 10,000 households, and more than
3,000 loans have since been modified, Mr. Marks says. He won't disclose
NACA's success rate but says that it wins some change in loan terms in
the vast majority of cases, including about 24,000 mortgages last year.
Hope Now, an alliance of a wide array of mortgage companies, investors
and counselors, estimates the mortgage industry modified 969,000 home
loans in all last year, a figure that would include NACA's total.

Mr. Marks grew up in affluent Scarsdale, N.Y., and Greenwich, Conn.
He says a childhood stuttering problem gave him sympathy for underdogs,
which evolved into a career as an activist. He studied business to
"know the enemy," earning an M.B.A. and working briefly for the Federal
Reserve Bank of New York. A later job for a labor union stirred his
interest in reviving poor neighborhoods and helping people afford homes.

In 1988 he launched NACA. It soon began arranging loans for
Boston-area banks that were eager to show they were serving poor
neighborhoods, in compliance with the 1977 Community Reinvestment Act.

The organization has been allocated $34.5 million from a new federal
program to counsel distressed mortgage borrowers, to be paid to groups
such as NACA little by little as they provide counseling. NACA's slice
is nearly 10% of the program's funds; the rest goes to more than 100
other nonprofits and state agencies. Besides these grants, most income
to cover NACA's roughly $40 million annual budget comes from the fees
lenders pay it for arranging new mortgages, typically $2,500 per loan.

Another NACA event is the "predator's tour." In February, it sent
hundreds of protesters to the homes of bankers and investors in posh
New York suburbs such as Rye, N.Y., and Greenwich. One stop was the
home of William Frey of Greenwich Financial Services, a broker-dealer
specializing in mortgage-backed securities. He was a target because he
resisted some aspects of a settlement that called for modifying loans.

State attorneys general had accused Countrywide Financial Corp. of
predatory lending, and Countrywide's new owner, Bank of America,
settled the suit last year by agreeing to modify many mortgages. A fund
Mr. Frey controls then sued the bank. The suit didn't take issue with
the settlement but complained that the bank had passed on most of the
cost of it to buyers of securities backed by Countrywide's loans.

Mr. Frey was the target of the protest in which NACA dumped
furniture on the lawn. "They had hundreds of people trespassing on my
property," he says.

"I have a difference with Bank of America. I have a substantial
amount of assets with them," Mr. Frey says. "We take them to court.
This is how we do it in this country....It's a civilized society." The
response from NACA, he adds, "is a mob showing up at someone's house to
intimidate them to drop this suit. At what point do people say, 'This
is starting to be uncomfortable'?"

"It should be uncomfortable," says Mr. Marks. "You win a
campaign by being relentless. Everybody has a breaking point....At some
point they say, 'How do I get these crazies off my back?' "

Some lenders have refused to sign contracts to work with NACA, among them HSBC Holdings, Barclays and Credit Suisse Group.
All declined to comment. Mr. Marks says some banks that won't sign
agreements do negotiate individual cases with NACA. Even so, NACA
sometimes pictures their executives and the executives' homes on its
Web site.

It recently added a photo of William Gross of Pacific Investment
Management Co., the big bond house known as Pimco, along with pictures
of his home and other information. Mr. Marks says his contacts in
banking and government tell him Pimco doesn't support the
administration's push to modify mortgages. "We're exposing them," Mr.
Marks says. A spokesman for Pimco said neither it nor Mr. Gross would
comment.

Mr. Marks says financial executives should be held personally
responsible for actions that affect people's lives, and "if they
interpret that as intimidation, so be it." He says that "we're not
talking about violence. We don't do violence."

NACA says it arranged $367 million of mortgages last year. Those
borrowers must become members of NACA, agreeing to participate in its
protests or help out at its offices, and for several years must
contribute to a fund for homeowners who fall behind because of sickness
or job loss. All NACA members pay the same interest rate, currently
4.375%.

Bank of America says home loans originated by NACA "are equal to and
in some cases are performing better than our prime book of business." A
bank spokesman added, "There are few organizations that can bring a
buyer to the table who has been through such extensive pre-buying
counseling."

Despite receiving taxpayer money, NACA doesn't provide public
reports on either its loan-brokerage business or its campaign to modify
mortgages. Jim Campen, an economics professor emeritus at the
University of Massachusetts, Boston, says he tried in the 1990s to
analyze the performance of loans arranged by NACA, but Mr. Marks
refused to provide data.

Mr. Marks says he feared the data would be used by another nonprofit
to discredit his group. NACA does provide information to lenders that
work with it, he says, but sees no duty to disclose it to the public.

"He's been very effective in shaking money out of the banks," says
Mr. Campen, but "he's not one to open up his records to public
scrutiny."